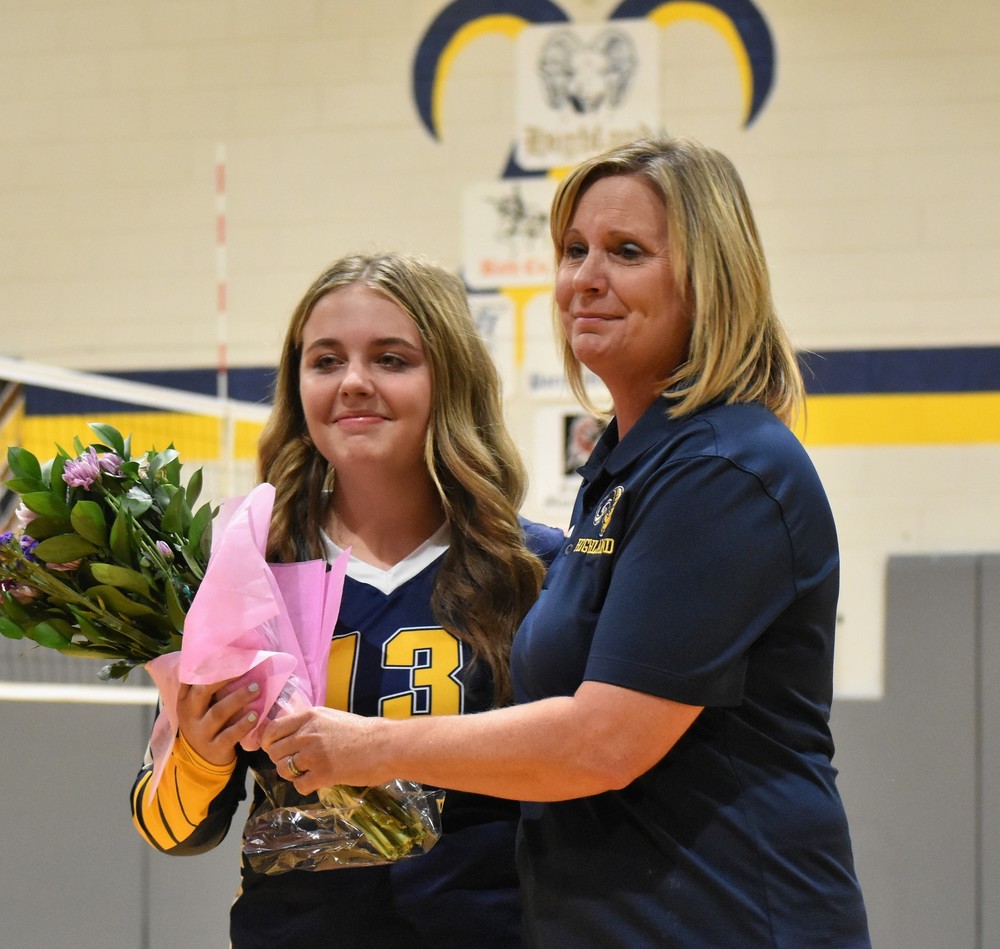 And the program saluted a pair of veteran senior leaders.

But the biggest celebration of the evening?

The Rams reserved that for a couple of hours after the pre-match ceremony.

The win completed a season-sweep over the Bulldogs and made a huge memory for the senior twosome of Kirsten Wood and Brianna Wimer.

“For Kirsten and I, personally, it was motivation that this was our senior night and we wanted to bring out a win,” said Wimer. “For the rest of the team, this is a team that we know we can compete with and we know we can beat. We just wanted to prove that to everybody.”

They proved it by coming back from a set down twice and showing some grit in the final set race to 15.

Zalea Good had three kills in the fifth, including winning a joust at the net to put the Rams up 13-11.

Autumn Warner followed with an ace on a short serve and a Bulldog error on match point secured the Highland victory.

Highland forced the fifth set by outscoring Tygarts Valley 10-1 to close the fourth.

Warner and Wimer each recorded kills in the run; Warner served an ace; and Good reeled off the last six points from the service line, two coming on aces.

“It's always tough after senior night and parents’ night,” said coach Wood. “The emotions are high and I think it took us a while to get settled down. Once we did, we just rolled with it. Just for Kirsten and Bri to know that they finished their true senior night with a win — that's something they will remember forever.”

With a roster of just seven girls, it took everyone to make that memory in a match that featured 199 total points played.

“Bri and I have played together since eighth grade,” said Kirsten Wood. “We play basketball together, we're best friends and this is our senior night. It's hard to believe that this is what it is.”

Kirsten said the group was motivated by a couple whistles that went against them late.

“I think we had fire in us,” she said. “We had a few controversial calls and instead of blowing up about it, we took that energy and made it better.”

The win was the result of an improved mindset, Wimer added.

“Recently toward the end of the season, we've kind of gotten a better energy about us when it comes to going into the sets,” she said. “We just have a better overall mindset of like, we can compete with this team. We just need to get ourselves together and have the right head space.”

The Ram jayvees took a set off Tygarts Valley last Wednesday night before falling 15-8 in the third set.