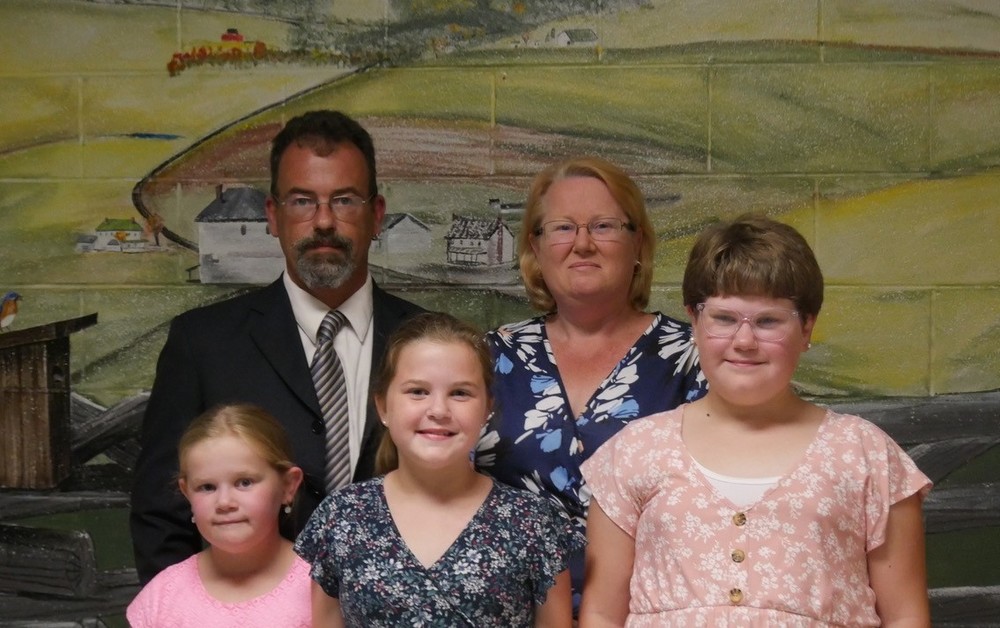 MONTEREY — Highland Elementary School is mostly empty this summer. Custodians and a few Youth Employment Program teens have been cleaning, painting, and rearranging, but the classrooms are dark and silent.
In the quiet, new elementary administrator Nicole Cabral is hard at work getting ready for the upcoming school year.
Cabral began working part-time in June and switched to full-time in July.
The last school year was difficult for students and staff after the death of long-time elementary principal Teresa Blum in the fall and the resignation of superintendent Dr. Thomas Schott in the spring. The Highland County School Board filled both spots temporarily, but the strain took its toll.
As she began her new role, Cabral spent time talking to teachers and staff about their needs and what goals they had for the school. Even though end-of-year test scores were lower than desired, Cabral decided to forgo summer school.
“The teachers looked at me and said, ‘Nicole, I really need a break,’” Cabral recalled. “I can’t argue with that.”
Rather than force exhausted teachers to work over the summer, Cabral sent them all home with orders: “Take some time for yourself.”
Cabral is confident the teachers will return recharged and ready to work with all students to meet their individual education goals.
“I’m really optimistic about the year,” she said. “We’ll meet the needs of the students where they are.”
Cabral plans to use a response to intervention model to help students who are not on grade level but do not have special education needs. “There’s no learning disability; they’ve just fallen behind,” she explained. “We’re going to focus on small group learning.
“We meet with the parent. We make a plan,” she said. “They are short-term interventions of about four to six weeks.”
While the school lost several teachers and aides this past year, Cabral is pleased with the remaining staff. “When I met with the staff, my first question was, ‘Why did you stay?’” she said. “Truly, the love of Highland County and this school came from every person I talked to. I’m walking into a staff that loves the students. I’m walking into a staff that stayed through the losses, that stayed through COVID.”
Highland Elementary School is still looking for fourth- and fifth-grade teachers. “We are making headway,” Cabral said. “We don’t just want to find people. We want to find people who will fit.
“We will have some names to put in front of the school board” at the August meeting, she said.
“We do have a plan B, a contingency plan. We will be fully staffed for the school year.”
HES has one special education teacher, which Cabral said is enough to meet the Individual Education Programs of all enrolled special education students, but she hopes to hire another.
“We would like to spread out the casework to two,” Cabral said.
“We’re really excited about starting fresh,” she added. “It’s really a reset for the schools.”
Part of the reset is a new school intranet Cabral is designing with technology director Gary Lane which will include a staff calendar and links to facilitate communication.
Cabral worked with STEM teacher Ginny Neil to create a STEM lab in the elementary wing. In addition to computers, the lab features a 3D printer relocated from the high school and DASH robots to teach coding. “It’s going to be a multi-use space,” she said. “We are going to start with what we have and build from there.”
Cabral expects students to be especially excited about the DASH robots, which have various skill levels. “They can be used all the way through high school,” she said.
With the 3D printers, students will learn to design their creations. “I use Tinkercad,” Cabral said. “We create something in Tinkercad and 3D print it.”
She said Neil is creating a curriculum for STEM topics that align with other subjects students study in their grades. “We are really focusing on integrating the STEM into the curriculum,” she said.
Cabral, high school principal Tim Good, and new superintendent Dr. Drew Maerz are planning meetings around the community. On Aug. 9, from 5:30 to 6:30 p.m., the trio of administrators will host a meeting with parents and community members in McDowell. They will do the same on Aug. 10 from 5:30 to 6:30 p.m. at The Highland Center in Monterey. At 6 p.m. on Aug. 15 at the Highland County Public Library, the three will join the Highland Parents Advisory Group.
The three administrators are holding weekly leadership meetings to prepare for next year.
“We really want to make sure we’re on the same page,” Cabral said.
When teachers return in August, they will have weekly meetings, too. “From the staff, communication is the key point,” she said.
Cabral is reviving the student of the month as positive reinforcement but doing away with award ceremonies.
Discipline is another area the administration is revising. “We’re having a consistent discipline plan throughout the building,” she said.
Cabral has rearranged rooms to make space for every employee, even those working part-time. “Everybody has a home now,”  she said, an improvement from her first weeks at the end of the last school year. “You could see everybody was unsure where to go.”
The Head Start preschool classroom is moving back into the main building from the trailer, where the class spent the past two years, due to pandemic spacing requirements.
Cabral is hoping relaxed restrictions will bring people back into the school.
“I really would like to get a PTA or PTO and parent volunteer,” she said.
“It’s little changes but still the same values,” Cabral said. “We really have been a cohesive team. We all want to see Highland progress.”

New family settles in
The Cabral family had been visiting Highland and planning to move here for several years but thought husband Mathew Cabral would be the first to move from their Virginia Beach home.
Mathew made maple syrup and wanted to find land for a farm in the county with the Maple Festival.
“He’s been eyeing Highland County for 10 years,” said Nicole Cabral.
Instead, Nicole applied for and was offered the Highland Elementary School administrator job and made a move at the beginning of the summer.
Mathew and their three girls followed after Mathew renovated their Virginia Beach home to rent, and Nicole closed on a house in Highland near the school.
“It really, truly just all fell in line,” Nicole said.
While Nicole is employed full-time at the school, Mathew is still looking for the perfect piece of land for his syrup endeavor. “We are going to be working on a USDA loan to buy land,” Nicole said. “The goal would be to find our own property to do maple, sorghum, and walnut syrup.”
The first few weeks alone in Highland were hard for Nicole as it was a significant change from her Virginia Beach home in the city. “It was dark, and it was quiet,” Nicole recalled. “There was no sleep.
“Now the family is here, it’s better,” she said, and the family is adjusting well.
Savannah is 12, Abbey is 11, and Emily is eight years old. “It’s nice,” said Savannah, adding that Highland is very different from Virginia Beach in size, but she likes it here.
“We’ve explored some,” said Abbey. “We’ll end up doing more fun things.”
“I like the view,” said Emily. “I like sitting on the front porch.”
“I agree,” Abbey said quickly. “You can see deer in the early morning.”
“It took them a little while to adjust,” Cabral said, but things such as wildlife helped. “They are truly thrilled to see the deer.”
“Abbey, in two weeks, she said, ‘We’re home,” Nicole said.
“I’m most looking forward to the Maple Festival,” Savannah said.
Savannah helped her father make syrup in Virginia Beach. “I went as a guest, but I will be working this year.”
Nicole said she is happy with the safe environment for her children, who can play in the front yard and around town. “The fear of somebody messing with my girls is gone,” Nicole said. “They have that freedom.”
The Cabrals enjoy meeting their new neighbors and participating in county activities.
“Everybody has been amazing,” Nicole said. “You know you’re in a small place when the neighbor brought us banana bread to say hello.”