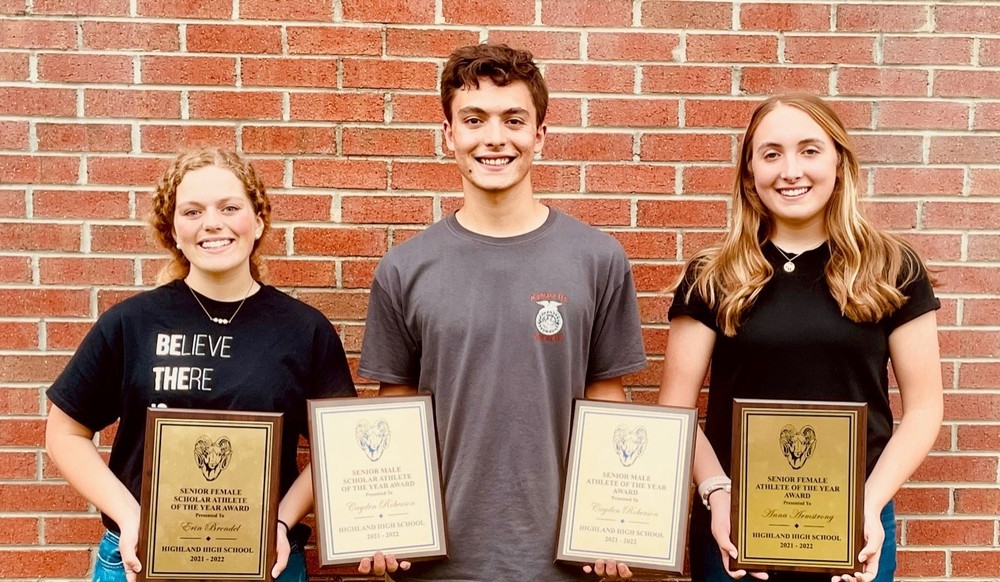 MONTEREY — Each year, Highland High School names recipients for senior male and female Scholar Athlete of the Year, and senior male and female Athlete of the Year. It’s unusual that both awards go to a single male or female in the senior class but this year, Cayden Roberson received both awards.
The Athlete of the Year award is selected by varsity coaches from seniors who compete in at least one sport all four years of high school. The Scholar Athlete of the Year award is determined by the highest GPA among students who played at least two sports in each of their four years. With the pandemic affecting the sports schedules over the last two years, some adjustments were made.
Athletic director Mike Warf explained the criteria for the prestigious awards.
He presented Erin Brendel, Senior Female Scholar Athlete of the Year, and Roberson with Senior Male Scholar of the Year. Anna Armstrong was named Senior Female Athlete of the Year and Roberson, Senior Male Athlete of the Year.
The highlight of this year’s banquet was coach Colby Jackson recognizing his track team for all their hard work and dedication. They were able to compete at the state level, and even caught the eyes of several other schools they competed against. Jackson also praised Danny Hull for all his help and expertise.
“As a coach, the performance from the state finals was as rewarding as if we had won the entire meet,” Jackson said. “Overall, the experience gave our kids confidence in the fact that they can go out and compete with anyone regardless of school size. I am so proud of every one of them and how hard they worked this year. I am looking forward to next year.”
Freshman Jazmine Douglas finished 16th in the lightning-fast 100-meter dash with a time of 13.71. “It is amazing that a freshman can come into this competition and blow everyone away,” Jackson said. “Jazmine starts the year off having never done track but wanting to participate to get in shape for basketball and then ends up going to the state finals in the most competitive race as a freshman. She worked hard all season and I fully expect to see her back there for three more years.”
The Rams’ 4×100-meter relay team of Roberson, Ethan Moore, Eli Moore and Colton Williams ran a season-best time to finish sixth. Jackson was impressed with the team’s time of 46:40 and finishing higher than Narrows, which beat the Rams for the regional title two weeks ago. “It was more than exciting to see a group of boys who started the season running in basketball shoes and not knowing what event to even try — medal is one of the most competitive events in the entire meet.”
Ethan Moore and Williams threw impressive throws at the shot put event, the coach noted. Jackson reminded the audience that neither of them is built like a typical shot put competitor. Moore placed eighth, with a heave of 42-7½, his season best throw, at the state championship meet. Williams finished 12th with a throw of 39-1¾.
“Ethan and Colton had fun in the shot put,” Jackson said. “Ethan finished eighth and earned a medal after only starting shot mid-season. They both will be back next year with a lot more practice and expectations in the event.”
As baseball coach J.D. Hiner shared a story about a time when they were on an away trip and had stopped at a gas station for snacks and drinks. People come up and comment on how the Highland kids are the most well-behaved, respectful kids they have seen, he said.
All the coaches thanked parents, grandparents, aunts and uncles, and the community for their support. They all said they love how the community rallies around the kids and encourages them. They also expressed appreciation to those who attend away games, even though they may drive hours to get there. It means a lot to the players when they look up in the stands and see people there from their hometown cheering them on, the coaches said.