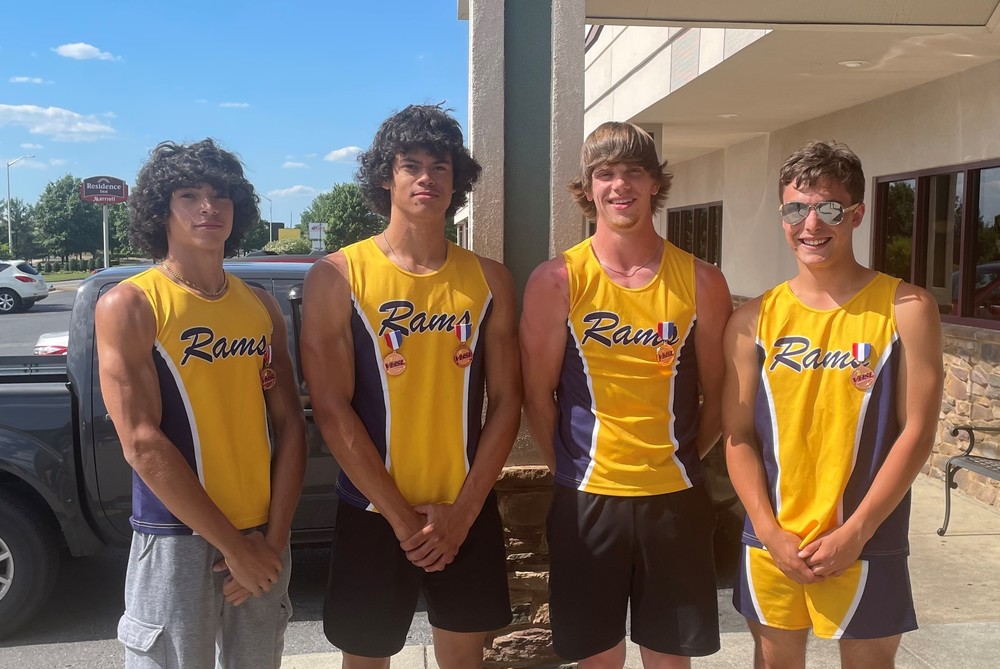 HARRISONBURG — Four Highland High School athletes earned all-state honors last weekend at James Madison University.
The Rams 4x100-meter relay team of Cayden Roberson, Ethan Moore, Eli Moore and Colton Williams ran a season-best time to finish sixth, while Ethan Moore added an eighth-place, season-best throw in the shot put at Sentara Park in the Class 1 state championship meet.
The Highland relay team turned in a time of 46.40 and finished two spots higher than Narrows, which beat them for the regional title two weeks ago.
“It was more than exciting to see a group of boys who started the season running in basketball shoes and not knowing what even to even try, medal is one of the most competitive events in the entire meet,” said HHS coach Colby Jackson.
Ethan Moore’s eighth place in the shot put came with a heave of 42-7½. Williams finished 12th with a throw of 39-1¾.
“Colton and Ethan had fun in the shot put,” Jackson said. “Ethan finished eighth and earned a medal after only starting shot mid-season. They both will be back next year with a lot more practice and expectations in the event.”
Freshman Jazmine Douglas finished 16th in the lightning-fast 100-meter dash with a time of 13.71.
“Jazmine starts the year off having never done track but wanting to participate to get in shape for basketball and ends up going to the state finals in the most competitive race as a freshman,” Jackson said. “She worked as hard as anyone at that race and I fully expect to see her back there for three more years.”
For Jackson, a Georgia native who played football at North Carolina State University, the weekend was a huge success for his group of Rams.
“As a coach, the performance from the state finals was as rewarding as if we had won the entire meet,” he said. “Overall, the experience gave our kids confidence in the fact that they can go out and compete with anyone regardless of school size.”
Covington had two athletes in state competition.
Purcel Turner cleared 5-6 in the high jump, placing 9th and finishing one spot short of an all-state spot, while Mitchell Tallman, a four-time state pole vault champion, failed to clear his beginning height of 11 feet.
“So proud of both Purcel and Mitchell,” said Cougar coach Lychelle Hall. “Purcel had a great sophomore season of outdoor track and field and I can’t wait to see what he accomplishes the next two years.
“Mitchell has had not only a great year of outdoor track, but an amazing career,” she added. “It has been an honor and a privilege being his coach and I wish him the best with his future endeavors.”
Auburn won the girls’ team championship, while Patrick Henry-Glade Spring captured the boys’ title.