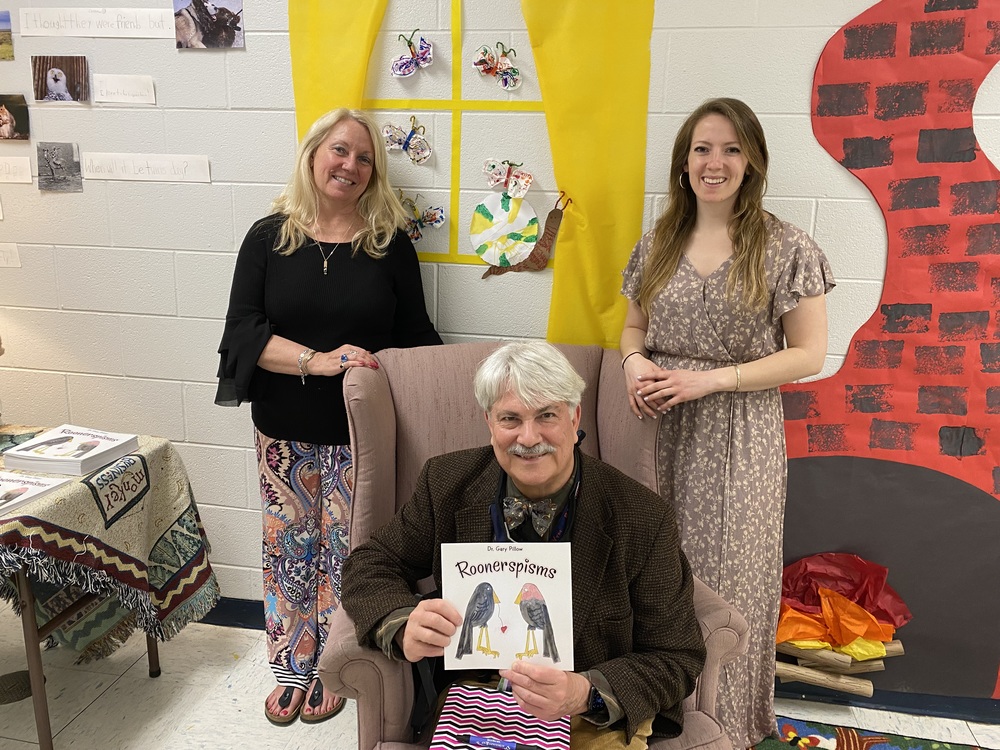 MONTEREY — Highland Elementary School students recently met an author/illustrator in person, as Dr. Gary Pillow signed copies of his book, “Roonerspisms,” at the recent book fair.
Pillow is the speech-language pathologist for Highland County Public Schools and has a private practice in audiology, speech-language pathology, and reading in Covington and Roanoke.
His book was released on Feb. 23, and teachers at the school are already using it in their lessons. “Basically, it’s a book to help develop phonological awareness in young readers,” Pillow said.
Pillow took about a year to complete the book, painting one illustration every Wednesday. “I’ve been painting since 1975,” Pillow said, but previously he mainly worked in acrylics. “This is my first attempt at watercolors. I wanted a challenge.”
The book gets its title from spoonerisms, which are made by switching the first sounds of two words to create two new words. For the title, “Roonerspism,” Pillow switched the sounds within a single word.
Inside, facing pages each have a pair of words. For example, a “hot dog” picture is paired with “dot hog,” which features a pink pig with purple spots. “These are pretty whimsical,” Pillow said.
“My kids love it,” said teacher Mariam Foster of her first-grade students. “I would show them only half of the pages and see if they can figure out the other page.”
“My little guys, they have to know beginning and ending sounds,” said kindergarten teacher Ann Foster. “This got them really thinking.”
The mother and daughter teacher team organized the book signing event, decorating part of the school’s hallway with crafty creations related to images in the book.
“I said we need to have an official book signing, and we hooked it to the book fair,” Ann Foster said. “The kids made the snails and the flutter-bys” that decorated the wall.
They even ordered cupcakes with matching decorations. The book-signing reinforced lessons in identifying parts of literature, Mariam Foster said.
“That whole focus of who is the author, who is the illustrator? That just blows their minds that they know the author,” she said.
“That’s just a big thing for them to recognize the author,” Ann Foster agreed.
Twelve families purchased the book for Pillow to sign during the book fair, and he donated his proceeds to the library.
School librarian Caroline Botkin said “Roonerspisms” had been a popular book in the few weeks she has had it. “The kids are checking it out,” she said. “They see it back, and it pretty much goes out of here as soon as it comes back.”
The teachers said students are drawn to the bright colors and playful words.
“I think he just has made it more for the children,” Mariam Foster said.
“I was not trying to be as artistic so much as to get the kids’ attention,” Pillow said. “I just really like to help children with early reading and literacy.
“It’s about twisting sounds around,” Pillow explained. “It’s just a tool for phonological awareness. I’m trying to develop different tools.”
Pillow is working on another book for parents and teachers to screen children in a fun, playful way. “They’ll know it’s problems if the children can’t say certain sounds by a certain age,” he said.