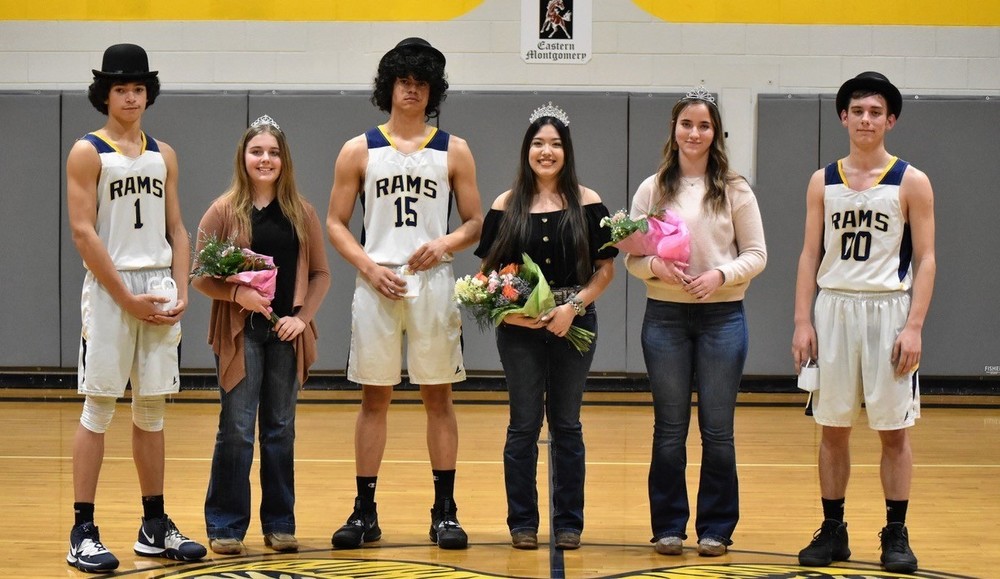 MONTEREY — What an exciting night the Highland High School boys’ varsity basketball
teams provided when they celebrated parents’ night and senior night.
Lone senior Cayden Roberson was recognized and given a basketball full of personalized wishes
and memories from his teammates. He will be missed; he has held the position of point guard
throughout his high school career. He started playing in the third grade with the Bobcats through
the Highland County Recreation Commission’s basketball league. Coach Thomas Moore talked
about how he had the pleasure of coaching Roberson starting in the eighth grade, saying he has
seen him develop over the years into a great person and leader.
The homecoming court was also crowned and recognized; they included senior queen, Tiffany
Aguilar; king, Wyatt Cunningham; prince and princesses, juniors, Ethan Moore and Kirsten
Wood; sophomores Dewey Moyers and Autumn Warner, and freshman Eli Moore and Jazmine
Douglas.
Ram Eli Moore got the game going with a shot from under the basket, then Jacob Phillips drove
toward the basket to get a four-point lead. Eastern Montgomery’s No. 23 put up a nice three to
try to steal the lead. Phillips drove to the basket again, and Dewey Moyers added a point from
the foul line. It was a shot from the Mustangs’ No. 12 that tied the game 7-7.
The Rams continued to put up foul shots from Roberson and Eli Moore, plus a rebound put back
up from Michael Campbell and Phillips, keeping the Rams in the lead, 16-8.
The Mustangs started bucking in the second quarter, scoring 23 points and only allowing the
Rams to score nine. Seven Mustang points came from the foul line and the rest came from 10
under the basket and two of the only three-point shots the whole game. The Rams’ three points
came from the foul line from the Moore brothers and Phillips each contributing one, along with
Roberson, Michael Campbell and Ethan Moore adding points off their fast breaks. The
combination of Ethan Moore’s block and Campbell’s fast break brought the score to 24-23.
The halftime show with the Highland Cheer and Dance Squad’s performance included a big
reveal — who had been playing Rocky the Ram all season? The crowd learned Todd Brendel
and Mariam Foster have been delighting the crowd with their moves. They were recognized and
given gifts for their contributions to the team.
The half-time show must've gotten the Moore brothers fired up, as they came back with an
agenda. Ethan produced four points early on, with 10 total in the third quarter; Eli had his game
high in the fourth with 12. Each of the brothers grabbed rebounds and blocked shots to keep the
Mustangs from scoring.
Teammate Campbell did his part providing defense that caused the Mustangs to produce loose
balls, and the Rams got closer, 43-36.
The fourth quarter saw the team come together with 24 on the board. Campbell put up five from
under the basket; Phillips, two with a drive; Ethan Moore put up four off rebounds. Brother Eli
Moore got the momentum going with back-to-back steals. He repeated this play with a few
minutes left in the game to push the Rams in the lead, 52-51.
It was the last 30 seconds that elevated the game.
A shot from the Mustangs gave them the lead, 57-56. Eli Moore got fouled. Ethan Moore
rebound and put the ball up to take the lead, 58-57. Eli was fouled again, and he found the net to
secure the win, 61-57.