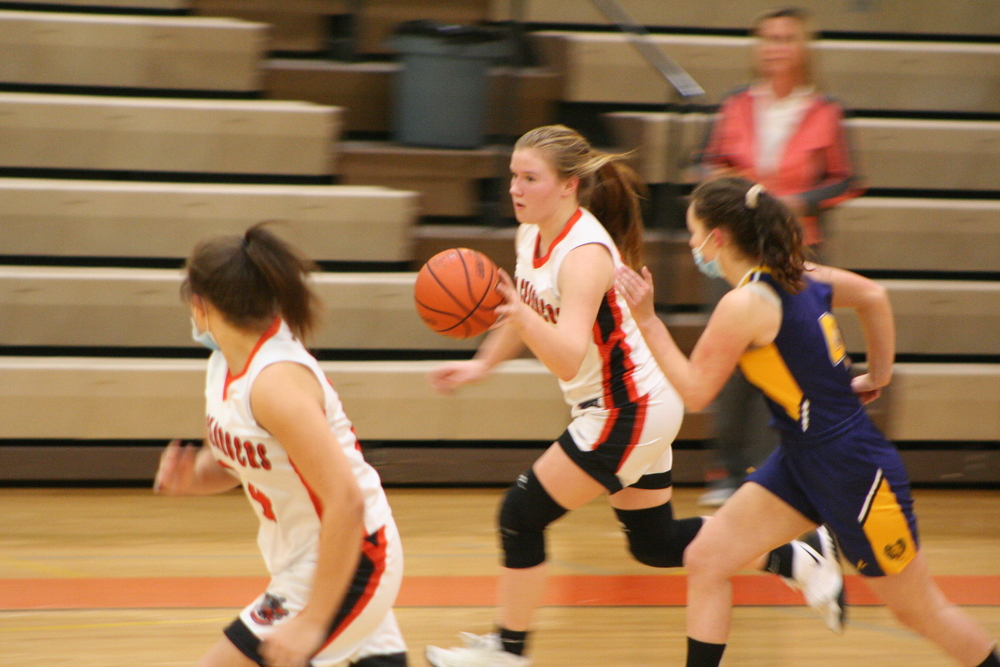 HOT SPRINGS – It was a close one on Monday night in the Chargers’ abode with the Bath County girls’ basketball team taking on the Highland County Rams. With just seconds left on the clock, the Rams were able to hold onto a two-point lead to take home bragging rights over their southern rivals — winning 28-26.

It was Highland that took the opening tipoff but after that, Bath controlled the tempo in the first period, putting up nine points to Highland’s one. That lone point for the Rams came off a foul shot from Kirsten Wood.

The nine points put up by Bath came from a spectrum of players for the Chargers. Most notably was a shot by senior Demi Legg, who was solely celebrating senior night on the team. Lindsay Oliver drew first blood on the night and picked up four rebounds for the Chargers in the first period.

The second period saw the Chargers falter and stall as the Rams closed the gap thanks to eight points from Anna Armstrong. On the other side, Laken Tingler helped keep the Chargers afloat with six points of her own — giving the Chargers a two-point lead going into halftime.

Coming out of the half, the Rams were ready to keep this a contest. For the Chargers, their head coach had to leave the game due to unforeseen circumstances.

The Rams were able to outscore the Chargers in the third period and take the lead, 22-21. Wood was the lead scorer for the Rams in the second half, putting up eight.

For the Chargers, Tingler, excluding one foul shot by Legg, was the sole scorer in the second half, putting up 10 for the Chargers.

The latter half of the fourth quarter saw the Rams switch to four corners offense in order to run down the clock. It worked successfully on the inexperienced Chargers as they were unable to pry the ball from the Rams.

With the clock winding down, the Rams were able to hold on and pull off the win, 28-26. The Chargers fell to 0-15 for the season.

The Highland County girls will host Bath County Thursday night, travel to Craig County on Friday, play at Narrows on Saturday, travel to Covington on Tuesday, and host East Mont on Wednesday.