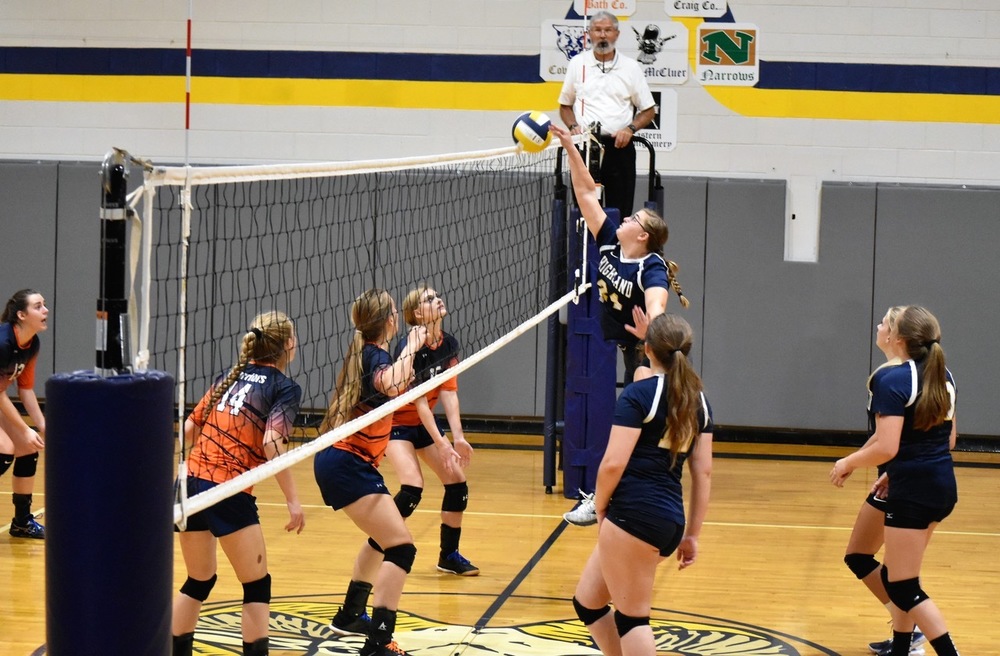 Monday, the Grace Christian Warriors traveled over the mountains to take on the

Highland County Rams in volleyball action. It was an exciting night for the spectators and the Rams as
they pulled out several wins.
Middle school
The middle school teams competed first. Grace Christian started with a three-point lead. The Rams
were unable to take advantage of being at the serving line to add points.
Grace Christian seized the opportunity, adding four serves each time they were at the line, then
dominated with six serves, three of them aces, to take a 17-4 lead.
The Rams kept fighting to gain possession but were unable to add points to the board until Brooklyn
Bussard was at the line. She added six serves, three aces to close the gap, 21-12.
With a Warriors’ serve into the net, Ram Kylee Arbogast served three aces to inch closer, 22-17. Ram
Adelaide Baxter served up an ace to bring it to 25-19, but with Highland errors, the Warriors took the
win on that final score.
In the second game, Grace Christian started with a four-point. The Warriors continued to add points to
bring it to 11-3. Addison Lockridge served two serves, one of them an ace, to bring the score 12-5.
Grace Christian added three more serves and an ace. Ram Ava Summers got a serve over the net to
bring it to 15-7. The Warriors continued to pounce, adding five more, but then the game got exciting
with Brooklyn Bussard at the line, serving seven straight aces to close the gap, 20-16.
Grace Christian was unable to add a serve. Ram Kylie Arbogast added two more serves, one of them an
ace, bringing the score to 21-19. The Warriors redeemed themselves and added three more, 24-20. Ram
Adelaide Baxter composed herself to add three serves, one ace, to keep coming back, 24-23. With a
good fight and lots of good volleys from Bussard, Arbogast and Lockridge, it just wasn’t quite enough
to come back out on top and the Warriors took the game, 25-23.
Kylie Arbogast had four serves, three aces, one dig; Adelaide Baxter, five serves, two aces; Brooklyn
Bussard, four serves, 10 aces, two digs; Addison Lockridge, two serves, one ace, one dig; Ava
Summers, one serve.
Junior varsity
Colleen Adams got the crowd excited with the first serve of the JV game, an ace. Due to a Warrior
spike being unreturned, they were able to have possession and took full advantage of it by taking an
early lead, 4-3. They didn’t know what to expect when Ram Zalea Good came up to the serving line;
she delivered five straight aces, which gave the Rams an 8-4 lead.
With a series of serves falling flat, the teams stayed neck and neck with the Warriors holding on to a
slight lead. It came down to errors. Eleven points were given to the Rams, adding that to the Rams’ 13
points coming off serves, and it made for a nice win, 25-19.
Game two was deja vu, with Adams serving up two aces to put the Rams in the lead. The Warriors
came back with a spike to steal the lead 5-4. Autumn Warner served up three to help the Rams get back
up on top, 7-6.
Grace Christian was unable to advance. Rams Zalea Good served up six, four aces, to advance the
Rams to a 14-7 lead. With Grace Christians serves going into the net, Rams Annah Arnott Moyers and
Kylie Arbogast each added two serves to continue the lead, 20-8.
Grace Christian served an ace but it wasn’t enough. Ram Colleen Adams provided an ace of her own
and Autumn Warner delivered the game winning serve as the Rams took it, 25-12.
The Rams earned eight points off Grace Christian errors and got in 17 serves.

Colleen Adams had four aces; Kylie Arbogast, five serves, two aces; Jazmine Douglas, two serves, one
ace, one dig; Annah Arnott Moyers, five serves, one ace; Zalea Good, 11 serves, nine aces; Autumn
Warner, five serves, two aces, one kill.
Varsity
Grace Christian started the varsity game with a two-serve lead, but Ram Kirsten Wood’s spike helped
them get possession. The Warriors delivered a spike to regain control and added the Rams' combination
of Emma Herold bumping and Wood saving, gained possession again.
Carly Thomas delivered a serve and Lauren Davis added a nice tip to try and regain the lead, 5-4. The
Warriors delivered an ace but it was Ram Alexis Wilfong’s ace that tied the game 6-6.
The Warriors had an opportunity to score, but Thomas delivered a spike to regain control and tie the
game, 7-7.
The combo of Lauren Davis’ serve and Thomas’ dig helped the Rams take the lead 8-7. The Warriors
unleashed their fury with 10 serves, three aces and four spikes to take an 18-8 lead.
The Rams were unable to take advantage when they had the ball. Grace Christian delivered a spike to
regain control and pounded six serves to take the win, 25-8.
In the second game, the teams remained neck and neck until the Warriors pounded five serves, two
aces to take a 10-3 lead.
The Rams were unable to regain control as the Warriors delivered spikes and added points, eventually
taking the win, 25-13.
The Rams only earned points on three serves; the rest of the 10 points came from Warrior errors. The
Warriors served up 17 points and the seven points came from Ram turnovers.
In game three, Thomas’ spike helped the Rams gain their first point, but a Grace Christian spike tied
the game. The teams traded points until the Warriors served two aces, leading 5-3.
Ram Lauren Davis’ serve and Thomas’ block helped them to inch closer. A Warrior spike kept them
one point ahead. Thomas returned the favor with a spike to take the lead, 6-5.
The Warriors kept adding points with serves to gain a four-point lead. Brianna Wimer added an ace but
then the Warriors secured the lead, 16-9.
The Rams kept fighting, adding only one each time at the line. Ram Anna Armstrong added a spike to
regain control of the ball. The Rams were unable to overcome Warrior spikes, allowing them to capture
the victory, 25-17.
Anna Armstrong had two kills, nine serves; Erin Brendel, one dig; Lauren Davis, one block, five
serves, one tip; Emma Harold, one block, one serve, two aces, one dig; Carly Thomas, two blocks, four
kills, eight serves, one ace, two digs; Alexis Wilfong, two serves, one ace, four digs; Brianna Wimer,
two blocks, two serves, one ace; Kirsten Wood, one kill, five serves, four digs.