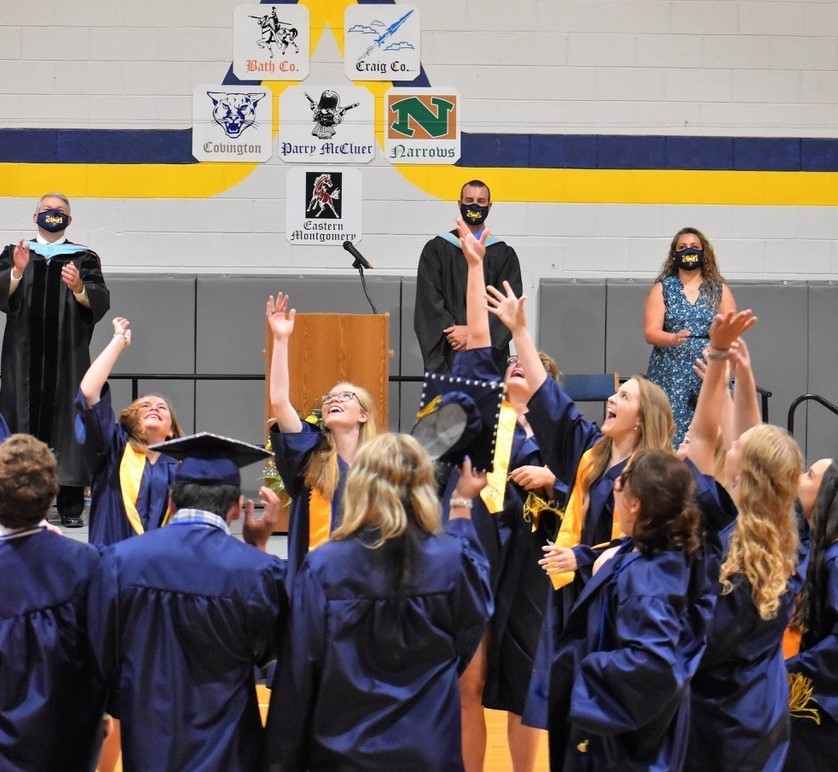 MONTEREY — The chairs and bleachers were packed Saturday morning. Neighbors greeted
one another as if they were attending a family reunion, some of which might be.
The only thing making this year’s Highland High School graduation different from the others:
masks. Every spectator, family member, friend, and teacher wore a mask. It seemed a small price
to pay to be able to get together after over a year in a pandemic.
As the superintendent, principals, and class sponsors filed in, the graduates began to enter the
gym one-by-one to the classic, “Pomp and Circumstance.” These graduates seemed eager to get
the show started because shortly after 10 a.m., class treasurer Rieley Warf led the audience in the
Pledge of Allegiance and thanked those attending for their support “in person and virtually.”
Graduate Kim Arnott quickly introduced the salutatorian, Mary Winters Blanchard.
Blanchard, who plans to attend the University of Virginia in the fall, gave a brief speech on the
importance of being kind to others. “When you stop to think about it, kindness is something that
has always been felt within our community,” Blanchard said.
Blanchard said her experience working at The Curly Maple showed her the impact of kindness,
especially gestures of kindness from the late chef of Curly Maple, Christ Royal. “Sometimes,
when I would arrive at work, Chris Royal would have made me a surprise breakfast,” Blanchard
added with a smile.
Graduate Austin Ailstock introduced the valedictorian, Rachael Amirault.
Amirault, who is attending William and Mary this fall, reminisced about her class’s history.
“We’ve been through it all together … intense dodgeball games, SOLs, Pumpkingate 2018, and
now even a pandemic,” Amirault said with a chuckle.
Amirault talked about the three lessons she’d learned growing up in Highland County:
community, empathy, and living for others. She wisely stated, “I have learned that our actions,
however unimportant they may seem, have an impact not only on Highland County, but on our
global community in one way or another ... Solutions start small, and anyone can start that
change.”
The class then welcomed their guest speaker to the podium, Lisa Roberson, who began her
teaching career with the Class of 2021 in preschool.
Roberson blew them a kiss and said, “It is important that you all know that as a teacher, a piece
of your heart belongs to every student that walks through your door.”
She talked about finishing their preschool year as their teacher and about being a first-time fifth
grade teacher with them as well. “You all came along and made yourselves very well known
right away,” Roberson laughed softly.
She finished her speech with words of advice, beginning with the “Five W’s of Life.”
“Remember who you are and what makes you special ... what lies ahead will be a mystery —
explore and go where there is no path. When life pushes you over, you need to push back harder.
Where there are choices to make, make ones you won’t regret in 10 years. Why things happen
will never be certain. Give yourself grace and keep moving forward.”
After the speeches, Tim Good, HHS principal, gave a few parting words based on the word
“COVID” — a word everyone became all too familiar with over the last 13 months.
“I hope you will see this word differently after today. Creativity — that’s what you’ve had to be
in this One-of-a-kind year. You’ve had to establish what is Vital and your Innovativeness and
Determination got you here,” Good said.

The students were given permission to take off their masks to receive their diplomas. As each
student was called up to receive a diploma and a handshake from the principal, the crowd
cheered each one on, with battle cries, whistles, and in Amirault’s case, a lot of cowbells. All the
students were eager to receive their diplomas, especially Caleb Hiner, who rushed up to the stage
before his name was even called.
Graduates and audience alike were a bit teary as they filed out again to “Pomp and
Circumstance.” However, before the song ended, the graduates rushed back in and formed a
circle around the ram’s head. They threw their caps into the air shouting, “Let’s go!”